“Donkeys can carry about 340 lbs for 15 hours a day”, a voice behind us says. “I should know, I used to command a donkey team in Nepal.”

My knowledge of donkeys is limited, but I am fairly sure that taking commands is not one of their strong points. I wonder facetiously what language the owner of the voice talked to his donkeys in? Ass-amese, perhaps?

The First Mate and I are on a bus on the way to Peel on the west coast of the Isle of Man. We have bought Day Travel cards which entitle us to ‘hop-on-hop-off’ bus travel for a day, and plan to do the round trip of Peel, Ramsey and Laxey.

“Yes”, the donkey commander continues. “I had a team of ten men and their donkeys that we used to ferry supplies from one hill station to another. Lovely country, Nepal.”

I am dying to turn around and see who the donkey commander is, but don’t want to appear rude. I surreptitiously look in the driver’s convex rear view mirror and just make out the reflections of two rather military-looking gentlemen in cloth caps in the seat behind us. They seem to have only met each other on the bus, but know about half of the British Army in common between them, and spend the rest of the bus trip discussing the achievements, faults and failings of them all. Or so it seems to us. The donkey commander seems to be higher ranking than the other, who spends most of his time agreeing with what the commander says. We decide to call them the Commander and Corporal. 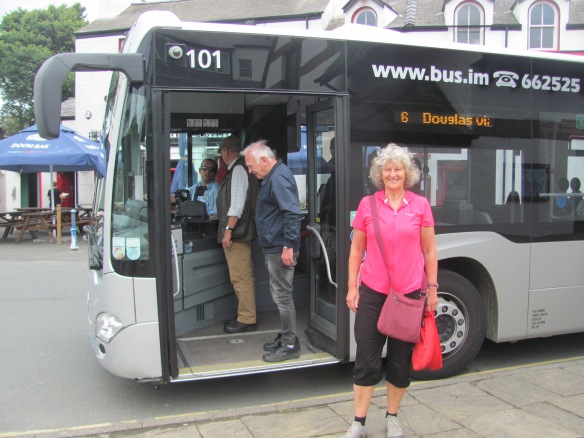 Getting off the bus in Peel. The Commander and Corporal follow.

We arrive in Peel, and disembark near the harbour. The Commander and Corporal also get out and go their own ways. It is raining, so we take shelter in the House of Manannan museum in the old railway station. Manannan was a mythical sea god of the Celts who ferried dead souls to the Otherworld in a chariot pulled by his trusty steed Enbarr, and may have given his name to the Isle of Mann. The museum has life-size reconstructions and numerous videos covering the Celtic, Viking and modern traditions, reminiscent of the Jorvik museum in York. Next door, there is an exhibition on cartoons by Phil Wood which keep us amused until the rain stops.

The House of Manannan.

We walk along East Quay past the marina until we come to the lock gates, which as chance would have it are just opening to let two or three boats out. Beyond is St Patrick’s Isle with the impressive Peel Castle situated on it. The original castle was built in wood by the Viking, Magnus Barefoot, in the 11th century, but was added to over the years using the local red sandstone. There is even a cathedral built within it. The grave of the so-called Pagan Lady whose spectacular necklace of precious stones and cache of silver coins we had seen in the Manx Museum in Douglas were also found in a graveyard within the castle. 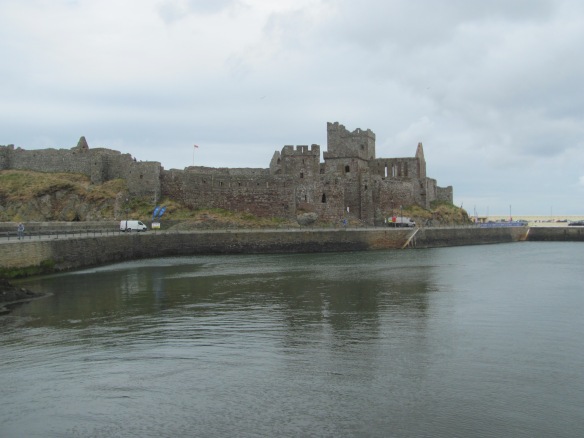 We have lunch in the Marine Hotel on the beach front, making sure that we sample the local Bushey beer, before catching the bus to take us on to our next port of call, Ramsey, on the east side of the island. On the way, we talk to a man from London who builds and plays pipe organs, and who has been coming to the Isle of Man every summer for the last 40 years because he likes it so much. He is organising a concert in Douglas in a week’s time and invites us to come. He is not allowed to charge for the performance, but donations are welcome and go to a charity of his choice. We promise to come if we are still in Douglas then. 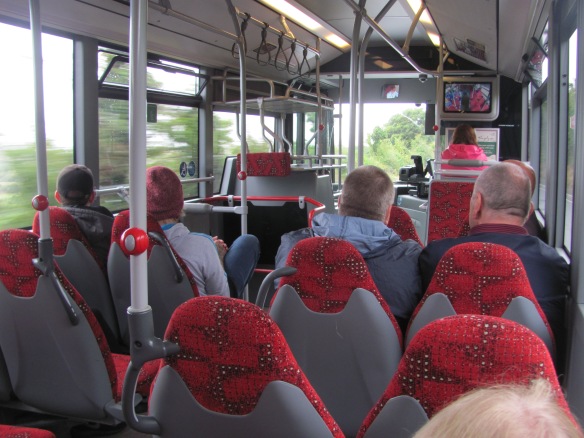 On the bus to Ramsey.

It is pouring with rain as we arrive in Ramsey, and we make a dash to the bus shelter. The town is supposed to have the sunniest climate and the lowest rainfall on the whole island, but someone has forgotten to tell the weather gods today.

While waiting for the rain to stop, we have coffee in the appropriately named Conrod’s Coffee Shop in Ramsey, with its TT motorcycle theme. On the bus, we had passed several stands for spectators at strategic positions along the road, and we had noticed several shops with motorcycles in the front window, even if they weren’t actually selling them. The race, which is held in May and June every year, is a bit of an orgy for petrol-heads, and involves closing all roads on the track to the public for two weeks, and is regarded at the most dangerous motorsport event in the world. It would have been interesting to see it, but apparently the Isle is overrun with bikers at the time and it is not easy to get around. 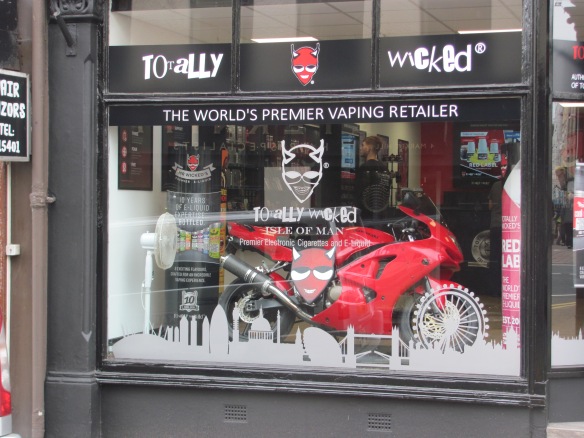 The rain eases off, and we explore the town. Like the other towns on Man, Ramsey has its origins in Viking times and gets its name from the Old Norse words meaning ‘river of wild garlic’. The Viking heritage is evident as we explore the town, particularly a fine sculpture of two Viking kings playing chess. One is the legendary King Orry and the other his son, King Olaf. Orry must have been another one who liked Mann, so much so that he kept coming back time and again to try and take over the island. On the first two occasions, he was sent packing by the local Manxmen, but managed to beat them on the third attempt, and became the island’s ruler. I think that if I was a Manxman, I would prefer holiday makers giving organ recitals!

We get off the bus in Laxey, or ‘Salmon River’ in Old Norse. We don’t see any salmon, but the main attractions are two large water wheels used to pump water out of the lead and zinc mines that flourished during the 19th century. One wheel, the Lady Isabella, is supposed to be the largest functioning waterwheel in the world. The mine itself extracted mostly lead, but also zinc, silver, copper and iron, but eventually the amount of ore taken out reduced, and together with problems of flooding that the giant wheel couldn’t cope with, the mine became uneconomic to run and it closed.

Interestingly, the three-legged symbol of the Isle of Man, the triskelion, is reversed on the wheel – apparently this was a mistake and there were plans to correct it at one point, but nobody got around to it. The Manx are quite proud of their symbol – one story put about is that whichever way it is thrown, it will always end up on its feet, illustrating the resilience of the Manx nation. Another more prosaic explanation is that one leg is to flee from Ireland, the second is to kick Scotland, and the third to kneel to England. Whatever the meaning nowadays, it is an ancient Neolithic symbol, and has been found in tombs in Ireland dating back to more than 3000 B.C., and in Malta as far back as 5000 B.C. A similar symbol is on the flag of Sicily.

We sit and have an ice cream in the warm sunshine. At that moment, there is a toot, and a small train appears from around the corner and draws to a stop at the little station nearby. It is the narrow-gauge electric railway that runs from Douglas up to Ramsey. We consider taking it back to Douglas, but at that moment, the bus arrives and we climb on that instead. It goes much the same route, after all.