“Would Madam and Sir like to see our tea selection?”, the waiter with a man-bun says, appearing from the shadows and thrusting a menu in front of us. The accent sounds Italian.

We are in a swish tea shop in Douglas. The room is dark, with green marble wallpaper, and all around us are portraits of famous people, many in military uniforms. A box of cigars lies open on a small delicately carved wooden table. I wonder momentarily if we have stumbled into the office of a banana republic dictator.

“Ooooh, turmeric latte”, says the First Mate after a quick scan. “We have to some of that – it’s fantastic. And it’s good for you – it has lots of antioxidants.”

I am not sure if I need any more antioxidants, but I may have been getting too much oxygen in all the sea air I have been breathing lately, so perhaps I do. The waiter with the man-bun looks slightly perplexed. I suspect he was looking forward to showing off his knowledge of the world’s teas.

“Garçon. Deux turmeric lattes, s’il vous plâit”, I say. Moi, I can do pretension too. I realise too late I have said it in French rather than Italian. Not that I know any Italian anyway. The waiter with the man-bun looks even more perplexed.

The two turmeric lattes arrive, lighting up the room.

“Urrrrgh. I don’t like this very much”, says the First Mate after a sip.

“I thought that you said it was fantastic and good for you?”, I say.

I actually quite like it, and polish off both glasses with gusto while the First Mate wades into an extravagant-looking cake.

We are exploring Douglas after the gale has subsided. It is a curious place – while there is obviously money here judging from some of the houses tucked away and cars being driven around, there is also a feeling that it has seen better days. Early in the twentieth century, it was the ‘place to be’ holiday resort for well-to-do folk from northern England, who would disembark from steamers in their droves to enjoy the summer there. Apparently, it was known as ‘Naples of the North’, and was reputed to have a thousand boarding houses and dancing halls along the promenade. 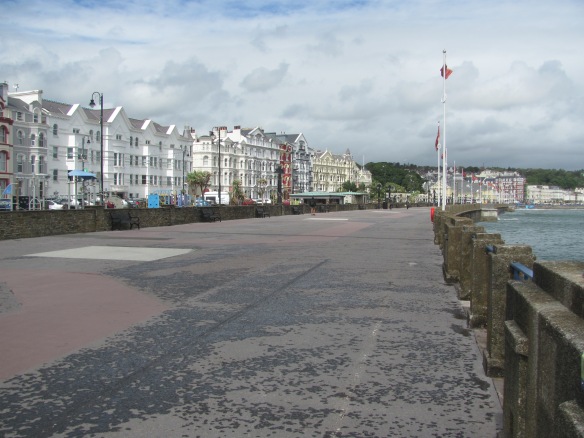 The promenade in Douglas.

Today the promenade is more-or-less deserted apart from an occasional jogger. Despite all the space available, an old lady pulling a shopping trolley cuts in front of me, nearly tripping me up. She stops, and looks intently out at the small castle marking St Mary’s Isle, a dangerous reef that is submerged at high water. We try to imagine what takes her interest so much.

We find the museum and spend the next couple of hours there. As museums go, it is a good one, and gives us a comprehensive overview of the island and its history. Settled by Celtic people, and later influenced strongly by the Vikings, the Isle of Man has somehow managed to remain independent from the rest of the UK, albeit with the status of a Crown Dependency managing its own internal affairs but with the UK taking responsibility for its foreign policy and defence. It even has its own Parliament, the Tynwald, dating from Viking times, which it claims to be the longest continuously functioning parliament in the world.

The wildlife section is very well done, and we are able to clarify the names of several birds we have seen but not been able to identify. We see the famous four-horned Loaghtan sheep, native to the island, and whose meat is regarded as a delicacy.

That evening, a Harbour Control man knocks on the window. He apologises profusely for not coming sooner to see us to make sure that we are all OK and to bring the forms we have to fill out, but it was the weekend and he had the in-laws to stay. We don’t mind, and invite him in from the drizzle just starting. We make him a cup of coffee.

He is from Manchester originally, but has lived in the Isle of Man for 13 years. His previous job was a steward in the merchant navy, but he got fed up with all the travel and decided to settle down. “Eventually the glamour of travelling the world wears off”, he says. He loves living here as it is much more relaxed, and cheaper. Taxes are lower, and he can afford a house in Douglas and cycles to work, something he could never do in Manchester.

We mention the words ‘tax haven’, and his brow furrows. “People don’t like that term here”, he tells us. “It’s true that back in the 1960s and 70s it was actively promoted as that, but the UK Government didn’t like the idea of the wealthy hiding all their money here and not paying taxes on the mainland, so they have tidied up their act here now. They prefer to call it a ‘low tax area’.”

We nod sagely, wondering what the difference is.

Changing the subject, he tells us that the ferry that supplies the island, Ben My Chree, had suffered ‘catastrophic failure’ on the Saturday, and has had to cancel all sailings until it is fixed. He isn’t sure exactly what catastrophic failure means in this case, but that is what someone had told him. Perhaps some problems with the engines.

The last time it had happened it had been out of commission for a week or so, and the shops had run out of supplies from the UK. People had started panic buying to stockpile food, causing even more shortages. They were trying to keep it quiet this time to avoid that. I wonder why he is telling us, especially as the First Mate mutters something about getting to Tesco first thing in the morning. 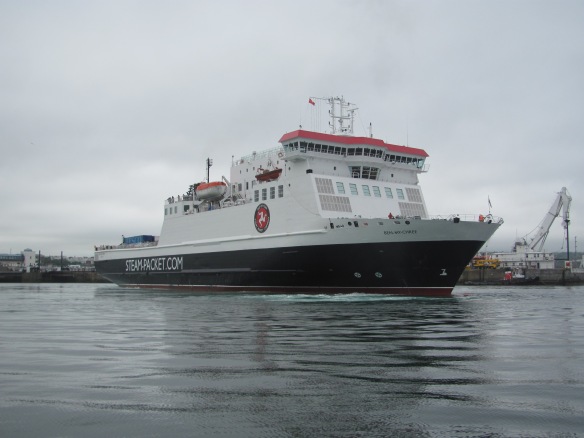 The Ben My Chree.

That night, I lie awake wondering if the turmeric latte will turn my hair orange and people will call me Donald. In the morning, I go to the heads and look in the mirror. My hair seems normal, but I am sure that my pee is yellower than yesterday. Hopefully it will work its way through.