We are sitting in the sun on a bench in the pedestrian precinct in Hastings eating our lunch when a woman comes and sits next to us. We start chatting.

“I always think they have been very unfair to Harold, you know”, she says. We are talking about William the Conqueror, and Harold, the conquered. “No monument, nothing”.

“I suppose it’s always the victors that write history and get remembered”, I say.

“Yes, but Harold achieved an awful lot”, she counters. “When the Norwegians landed in the north of England to claim the throne of England, he managed to put together an army pretty quickly, marched them all up to Yorkshire, won the battle of Stamford Bridge, then marched his men all the way back down again in a few days to do battle with William and the Normans. It wouldn’t do them any harm to put a monument up somewhere to commemorate what he achieved.”

I could see I was talking to an expert here, and desperately tried to dredge my memory of fourth form British history. “I guess his men were pretty exhausted”, I say feebly.

Bayeux Tapestry: the death of Harold (from Wikipedia).

Sensing my ignorance of the subject, she suggests that we visit Hastings castle on top of the hill, where they show a good video of the 1066 events. I make a mental note to do so. We then start to talk about New Zealand, where I come from.

“My daughter lives in New Zealand, you know” she says, “I went out there once to visit her, but I didn’t like it, so I came back here again.”

“Didn’t like it?”, we both chorused incredulously. “Why on earth not?”

“The roads were too windy for me”, she tells us. “My daughter took us for a trip in the mountains once, and I was terrified at the tiny narrow roads twisting and turning everywhere and vowed that I would never live there.”

“We do have some straight roads as well”, I say defensively. Her husband appears at that point, and our conversation terminates abruptly.

“Nice talking to you”, she says, and disappears.

We finish our lunch and explore the old part of Hastings under the cliffs. It is full of zany little shops of all types, which we take our time to browse. The Tattoo Shop is family run and offers tattoos for gentleman and ladies. Butler’s Emporium and Robert’s Rummage offer curiosities unlimited. Witches brooms hang outside AG Hendy & Co Homestores along with several other household items of yesteryear. You can probably find anything you want here, provided you have the time to look. We decide to sit in the sun and enjoy a coffee at Ye Olde Pumphouse, soaking up the atmosphere. An octopus tries to impress us by consuming a chess piece. It’s another world. 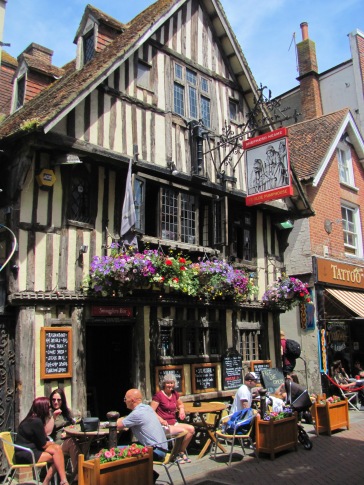 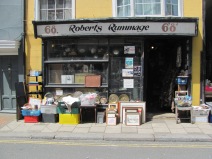 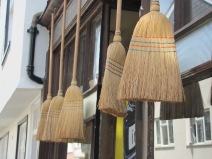 Sculpture of octopus and chess piece.

We find a set of stairs in an alley between two shops that takes us to the top of the hill to the castle. There is a fantastic view out over Hastings and across the Channel. In the distance, through the haze, we think that we can see France. We try to imagine William and his ships arriving to do battle with Harold. The Battle of Hastings didn’t actually take place in Hastings, but a few miles to the north, near where the town of Battle now stands. After the battle was won, William returned to Hastings to build his first castle in England. Nowadays it is just a ruin. We watch the video our lunch acquaintance advised us to, and learn a lot about 1066. It reminds me again of just how much of our history is tied to Europe – not only was Harold himself an Anglo-Saxon originating from northern Germany and Denmark, it was Norwegians claiming the English throne whom he fought at Stamford Bridge, and Normans themselves originating from Scandinavia but now settled in France whom he fought at Hastings. Can we really separate ourselves from Europe, even nowadays, we wonder? Will Brexit ever work?

We descend and catch a bus to Rye. On the way, we spot a Harold Street. Well, at least he had a street named after him, I think.

Rye is quaint. We wander down to the river and are surprised to see a few yachts tied up there. As much of it is drying, we didn’t think a keel boat would be able to make it up the river from the sea very easily. Obviously some could – perhaps they are bilge-keelers? We wander up to the church on top of the hill, meandering through the narrow cobbled streets with tiny shops tucked away between the medieval houses. Near the church there is a miniscule second-hand bookshop which I spend some time browsing. We wander down to the museum, but it has just closed, so we content ourselves admiring the view over the tidal river meandering down to the coast. Only a thoughtlessly located factory mars the view.