The sails fill and Ruby Tuesday surges forward. We are on our way again. 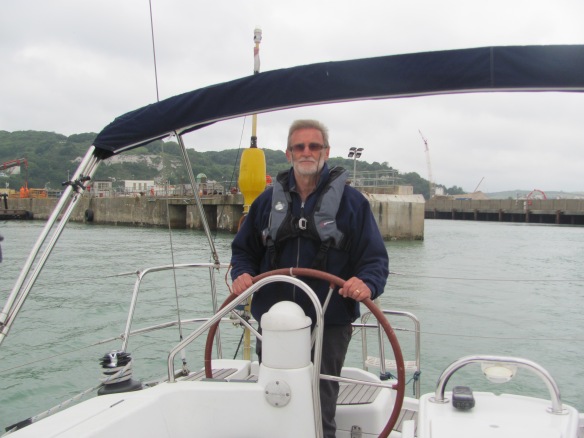 The furler swivel had arrived the day before and Sean the rigger and his ‘little helper’ Dave had come during the afternoon to fit it to the masthead. As someone with not too much of a head for heights, I have to say that I have the utmost admiration for anyone that can climb to the top of a mast swaying from side to side in the wind. The forestay had also been replaced due to damage to it from the seized swivel. The only thing remaining was for us to rehoist and refurl the genoa the next morning as it had been too windy to do so straightaway. 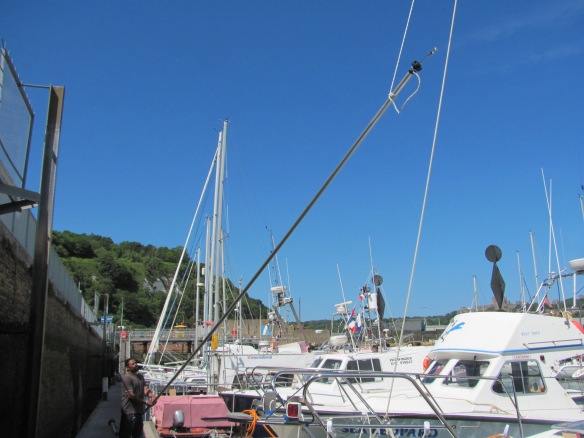 Raising the forestay and furler back to the top of the mast.

Dave was chatty. He lived in the Philippines on the side of Mount Pinatubo overlooking Subic Bay, the American military base, but he was back in the UK to sell his boat so he could buy a new one out there. While he waited for the many offers for his boat to flood in, he was giving his old friend Sean a hand winching him up and down masts. His partner was a Filipina and owned the house that he lived in. He himself had been in the merchant navy, but had done a lot of other things since then, and was now retired. He had a son from a previous marriage, now at the University of Cambridge. We had something in common, as we had also lived in the Philippines for two years, at Los Baños, south of Manila, where our own son had been born. We had once visited Subic Bay on the way back from the Banawe rice terraces, although then it was just after the 1991 eruption and much was still covered in ash. Now everything is green again, Dave tells us. 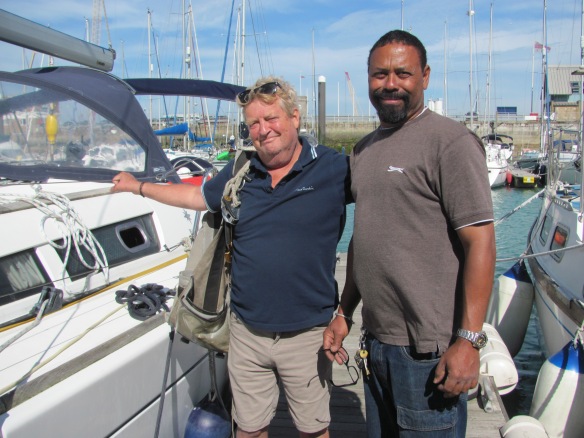 Dave and Sean, our riggers.

Strong winds from the southwest had been forecast for the following day, so we decided to take advantage of the last of the easterlies that we had enjoyed for the last month, and had left Dover in the morning. It wasn’t ideal from the point of view of the tidal flow, but we wanted to make it to Eastbourne in the daylight rather than arriving in the near dark. As a result, the first two hours had been motoring against a strong northward current, before the tide turned again to carry us southwards towards our destination, allowing us to cut the engine and hoist the sails. 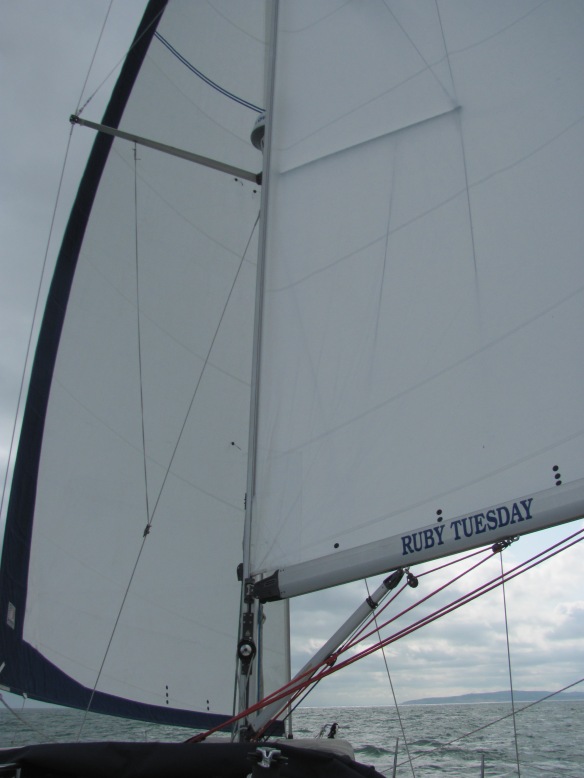 Running before the wind down to Eastbourne.

The wind is now directly behind us. We rig a preventer to the boom to stop any accidental gybes, and goosewing for the rest of the journey to Eastbourne. Before long, we are passing Dungeness Point with its two nuclear power stations. The stony beach in front has several fishermen trying their luck casting into the surf for cod. Some have put up little tents to provide shelter from the wind. We take care to clear the cardinal buoy warning us to keep south of the shoal that extends out from the beach.

Further on, we pass Rye, Hastings and Bexhill, while off to our port is the distinct shape of the Royal Sovereign Lighthouse. Otherwise, we are alone on the sea. I had thought that there might be more boats around, particularly in comparison to Scottish waters, but we see very few other yachts, and only the odd motor boat and fishing vessel passes us. Still, I suppose there is time enough; we are not in the Solent yet.

We arrive at the Sovereign Marina at Eastbourne at around 2000. At the red and white buoy we call the marina on the VHF and are guided in to a holding area in front of the two locks into the marina. Soon it is our turn, and we enter the lock along with another fishing boat that has appeared from somewhere behind us. A smiley lady comes to welcome us and take our details and tells us where to find our berth. It’s been a long day, but good sailing. 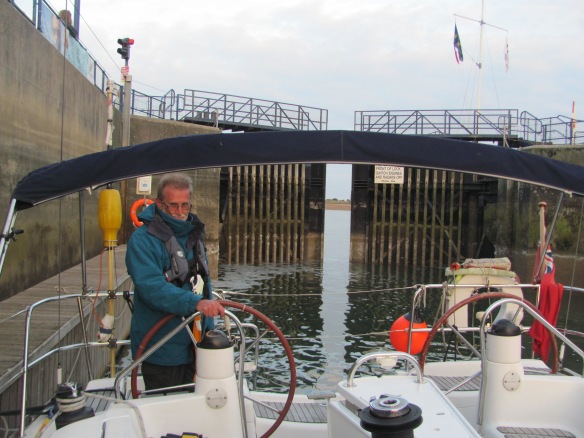 1 thought on “Dover to Eastbourne”