The next morning is wet and misty, with visibility poor. High water is at 0700, so to clear the bar we have to leave then. Seeing the green buoys through the drizzle and mist is a challenge as the mist completely disorients us, but by following the track of the GPS we had made the night before, we finally reach the red and white buoy marking the river entrance. Now safely out past the bar, we decide to anchor and have breakfast, hoping that the mist and rain might clear.

Our track in and out of Aberdyfi harbour. Note the shifting of the channel at the river mouth.

Sure enough, an hour later, the rain stops, the mist disappears, and the sun peeks out from between the clouds. Welsh weather is nothing if it doesn’t change at the blink of an eyelid. Living in Wales during my university days had taught me that. The wind is from the south, so we hoist the sails and head north, this time to the narrow channels that take us through Sarn-y-Bwch and Sarn Badrig (St Patrick’s Causeway), two more glacial moraines similar to Sarn Cynfelyn we had encountered just outside Aberystwyth. According to the legend, they were also causeways leading to the kingdom of Cantre’r Gwaelod.

Once safely through them, we set a course for Pwllheli, our destination for the night. The wind is still from the south, on our beam, and we have some good sailing across Tremadog Bay with the mountains of Snowdonia in the background. Up until now, Peter has been a little bit disappointed that he has not yet seen more mountains in Wales, but this makes him happy. One of them even looks like a volcano with its covering of cloud.

The mountains of Snowdonia from Tremadog Bay. 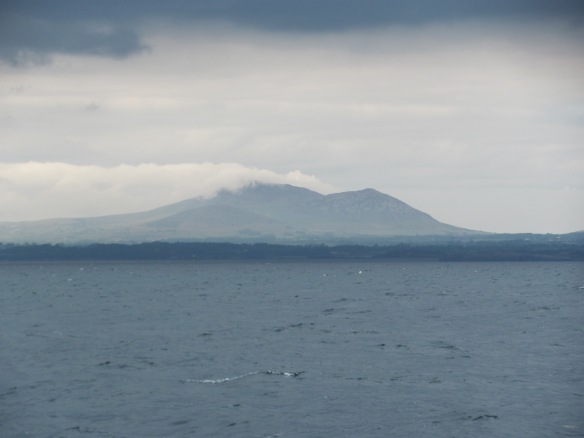 An active volcano in Wales??

As we arrive at the marina, we pass a rower heading in the same direction. We ask her where she has come from to which she replies Shrewsbury. With Shrewsbury well inland, we think either we misheard or she is joking, but we find out later that she is indeed from there. Her name is Kelda Wood and she is planning to row single-handed across the Atlantic in her small boat Stormy Petrel to raise funding for her charity helping young people to regain their confidence after a life-changing injury. She herself suffered a leg injury while horse riding when young. It’s a big challenge to row that distance but we wish her all the best and hope she makes it. Brave woman! 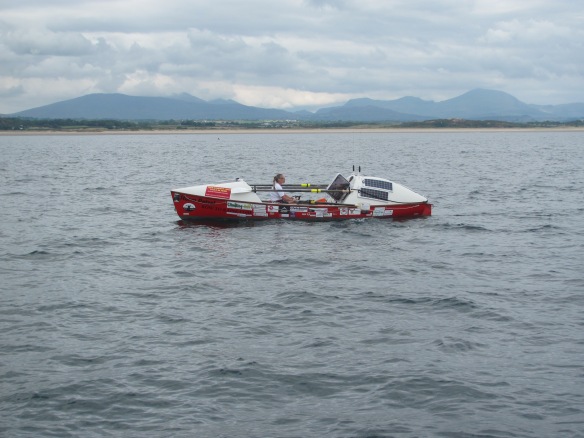 Kelda Wood and her Stormy Petrel.

That evening, we take a walk around Pwllheli, but it is late and nothing is happening except for a fish jumping out of the footpath. It happens all the time, so we content ourselves instead with an ice-cream before heading back to Ruby Tuesday. 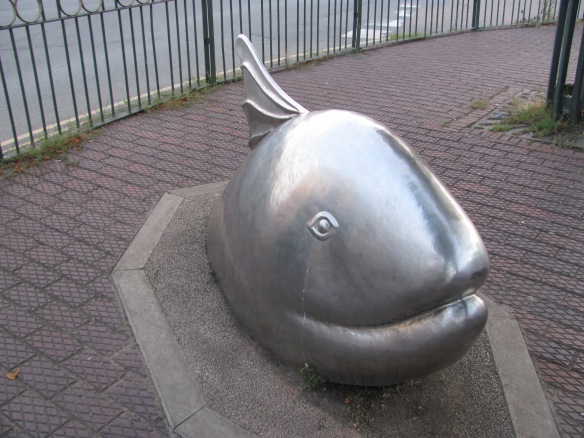