It is another glorious day, sunny, warm and cloudless. The Canada geese graze quietly on the grassy banks, occasionally emitting contented hoots at each other. From time to time a mother leads her goslings, now nearly adult size, across the river to join the ones on the other side. Two oystercatchers shriek piercingly as they probe the muddy shore with their beaks, while a black-headed gull stands a respectful distance. A kestrel circles overhead looking for prey, and a fish jumps from the water to catch an unsuspecting insect. A gentle breeze springs up, causing the river to glisten like thousands of tiny diamonds dancing on its surface. It is idyllic.

We are on the Beaulieu River, just across from Cowes. After a leisurely breakfast , we had motored across from Shepard’s Marina in windless conditions, having caught the west-flowing tidal stream, making 7 knots despite the engine just ticking over. Entering the river mouth requires a bit of care – there is a sand bar that is only 0.8 m deep at low water, but with careful tide calculations and lining up the transit marks of Lepe House and one of the red markers in front, it can be done. Once past the bar, there is plenty of depth, even at low water, all the way up to Bucklers’ Hard, a landing place and marina on a bend in the river. We decided to forego the pleasures of Bucklers’ Hard and find an unused buoy on a quiet part of the river and chill out.

Finding an unused buoy on the Beaulieu River to tie up to.

Later in the afternoon, the harbourmaster comes past in his little dory and we are asked to pay for the use of the mooring. He even has a card terminal for credit cards! We don’t mind paying something, but we think the prices asked are a little steep for just a mooring and no amenities or shore access. Still, it is a beautiful place to stay the night so we cough up. We guess the Duke of Beaulieu has to meet his expenses somehow. 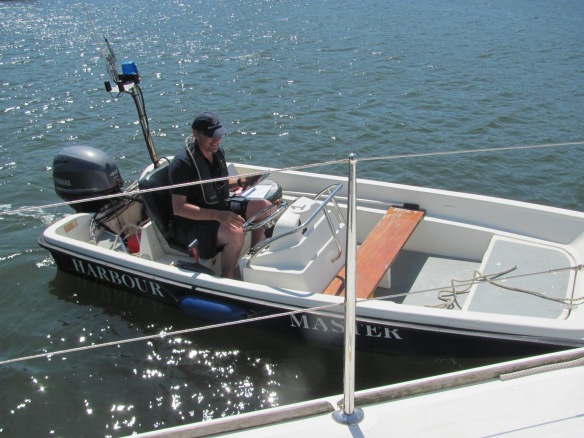 The harbourmaster comes to collect his dues, Beaulieu River.

In the evening, we sit and have our dinner outside in the cockpit watching the sun go down. The water is like a mirror, and the only noise we hear is the occasional splash as a fish jumps out and the shriek of oystercatchers. In the mud flats opposite, the geese and black headed gulls have been replaced by two white egrets, a curlew, and two ducks. The geese have decided to have some evening exercise after a day of gorging, and are swimming in a line between the moored boats. Beneath the boat, we see jellyfish wafting past. Between the trees in the distance, we see two horses grazing, and wonder if they are New Forest ponies.

Dinner on the Beaulieu River.

In the morning I awake at 0500, and sit with my cup of tea on deck absorbing the peacefulness of the river. Wisps of mist rise from the smooth surface as the early morning sun begins to warm it. The curlew is on the other bank now.

‘Ba-week, ba-week, ba-weeek’, says the oystercatcher on the mudflats next to us. My Birdese is a little rusty, but I know enough to work out that she is saying what a nice morning it is. ‘Yes, it is’, I agree. She returns to probing the mud for her breakfast.

‘Skee-skee-skee’, says the black-headed gull perched on the red buoy just behind us, not wanting to be left out of the conversation. ‘Skee-skee?’. ‘We’ll probably be leaving around mid-morning’, I answer. It doesn’t seem appropriate to be more precise than that.

Black-headed gull wanting to know when we leave.

‘Cheeki-cheeki-cheeki’, contributes the egret picking his way through the rocks on the bank. ‘Thanks,’ I say. ‘I hope you have a good day too, whatever you are planning’.

It’s good to talk, BT used to tell us. I think they had a point.