‘Clip, clop, clip, clop’. The black horse comes down the track, flaring its nostrils and throwing its head from side to side. The small boy stands rooted in terror as it comes closer. He tries to run, but his feet are glued to the ground and his legs won’t move.

I wake up in a sweat from the recurring dream I have had since childhood. I lie for a few moments and realise that the sound of the hooves hasn’t stopped, but it is not the dream. Someone is tapping at the window. I struggle out of bed and into some clothes, and poke my head out of the companionway. One of the marina staff is there and asks us if we could please shift as the navy are coming and they need that berth. We are slightly miffed as we had made quite an effort to edge carefully into the narrow space the night before, and feel that we have earned our place there. Moreover, we like it – it is conveniently close to the washing facilities and marina office. However, we can’t stand in the way of matters of the Defence of the Realm, so we untie our lines and reverse away from the pontoon. At least the boat that was behind has already gone, so we have more space to manoeuvre. 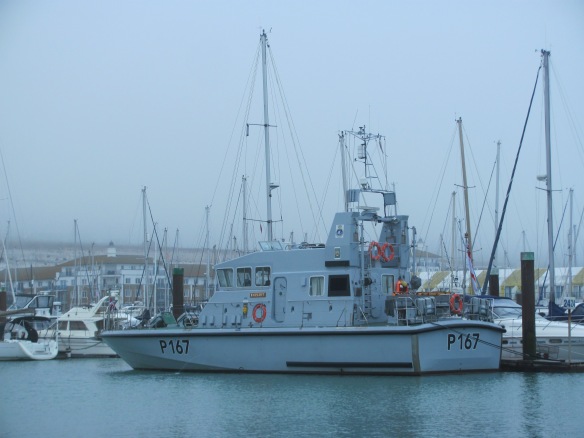 The navy arrives and we have to move.

The only problem is that, in the haste no one, not us, nor the marina staff, have remembered that it is just on low water, and just as we try and enter the alley for our new berth, we come to a firm stop, the keel embedded in the mud at the bottom. We give it considerable reverse throttle and manage to extricate ourselves into deeper water again amid the muddy cloud we have stirred up. We look around in embarrassment, but no one seems to have noticed except a marina staff member, who asks us to tie up temporarily to the end of a pontoon, but again we find ourselves unable to get there. In the end, we decide to raft up to another boat already tied to the end of a pontoon in deeper water. At least we are now stationary and aren’t drifting around the marina causing all sorts of damage. I notice that the name of the boat we are tied to is called Rolling Stone, so it seems very appropriate that Ruby Tuesday is alongside her. Who doesn’t believe in fate? We find out later that she did in fact originally belong to a roadie with the real Rolling Stones and is also made of ferro-cement, hence the stone connection.

Ruby Tuesday and Rolling Stone rafted up together.

The navy now catered for, we decide to explore Brighton for the rest of the day. The No 7 bus takes us into the city centre where we join the multitude of school parties visiting the Royal Pavilion. This extravagance was commissioned by George IV while he was the Prince of Wales as somewhere to hold parties for his mates, and was built in stages between 1787 and 1822. Constructed in the style of an Indian Rajah’s palace, it is interesting to see what can be produced with a rampant imagination and where money is no object. With that and his dissolute lifestyle, he soon found himself with massive debts, which fortunately (for him) were underwritten by Parliament. All this at a time when they were scratching around to pay for the Napoleonic Wars. Different times and different worlds – I wonder what the reaction would be to our current Prince of Wales building extravagant palaces during times of austerity, then having taxpayers pay for it? At least it is now publicly owned and the rest of us can enjoy it. 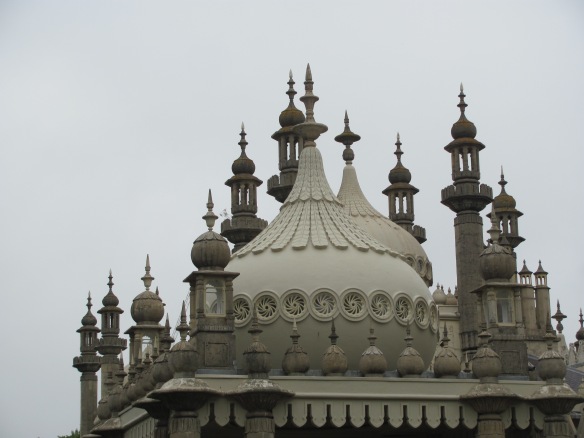 We find ourselves on the Palace Pier. Iconic, yet a monument somehow to the human desire for entertainment to distract us from the realities of our lives. We amble to the end, past the various amusements along the way. A party of French students chatter noisily as they eat their chips, or pommes frites. Below on the pebbly beach, some hardy bathers splash in the surf. In the distance we see a lone head bobbing up and down in the waves, a more adventurous swimmer heading for one of the buoys; we hope he makes it (why do we assume it is a ‘he’?). I think of Graham Greene’s Brighton Rock, a book we read at high school, and try to imagine Pinkie Brown and Rose on this self-same pier – Pinkie, the amoral Catholic sociopath, plotting the death of Fred Hale and Rose’s suicide, finally killing Hale here, and eventually dying himself at the end of the book. The superficial entertainment around us seems discordant with, and yet somehow complements, this darker side of human nature.

We retrace our steps and come across the Lanes, an area of narrow pedestrianised streets full of quirky shops reminiscent of those we saw in Hastings, although here they seem to be less touristy and catering more for the alternative lifestylers that make their homes here in Brighton. We find shops for ‘vegetarian shoes’, native American bric-a-brac, and second-hand clothes. A cloth-capped artist stands on a street corner with his easel painting a street scene. We like it – it contrasts with the opulence and cheesiness of the Pavilion and Pier that we have just seen. 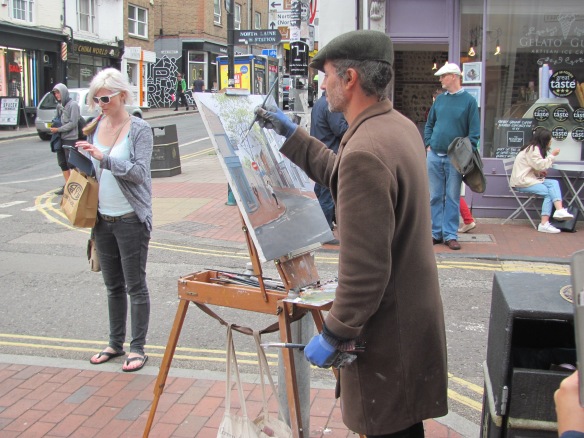 On the way back to the boat, we meet another couple, Dominic and Birgitta, who, it turns out are also sailing westwards and up to Scotland over a similar time period. We have a coffee with them, swap stories, and agree to keep in touch with each other on our voyages.