The Roman centurion swallows hard and orders his men to begin demolishing the wall of the inn house. He had stayed in it many times and had many good memories, and it is sad to think that it would soon be no more. The walls, in particular, the plaster murals of Bacchus and his mates, which had provided a backdrop for many a good drinking session, he feels bad about. However, he has been given orders to build the new fort here, and orders are orders, especially if they help to keep those pesky Saxons away. An idea occurs to him – perhaps he can just take down enough of the inn to build the wall of the fort through its middle, and leave the two halves intact on either side of the fort wall. That way, someone, in fact possibly two families, could still enjoy living in it. He tells his men to take away just the stones that are necessary …

My mind snaps back to the present. I am in the Roman Painted House in Dover, and am trying to imagine what might have happened to produce this remarkable ruin. Looking down from the modern balcony built around it, the five rooms of the house, the remnants of the painted Bacchanalian scenes on their walls, can be clearly seen, as can the underfloor heating ducts, and bizarrely, the wall and buttress of a fort that seem to have been pushed right through the middle of the house later on. Ironically, it seems that it was the building of this fort as part of the ‘Saxon Shore’ around 270 A.D. that might have helped preserve it – much of it was covered in rubble from the wall and protected from the ravages of time. 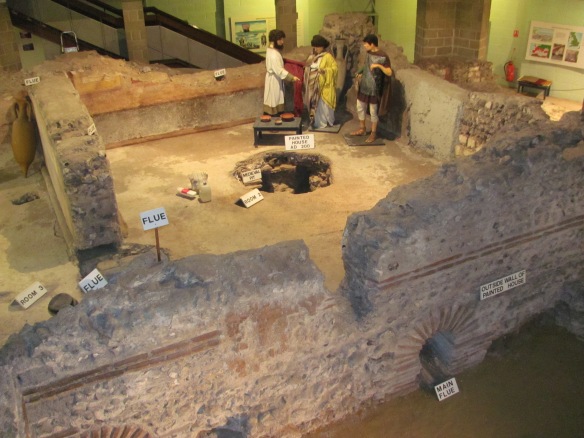 Emerging, we walk up to the White Horse pub, and over a drink read some of the hundreds of inscriptions on the walls of people who have swum the English Channel. We find that of David Walliams, the comedian, and that of an unknown Australian woman who swam it not once, not twice, but three times, with only a 10 minute break in between each one! A fascinating record of many personal triumphs. 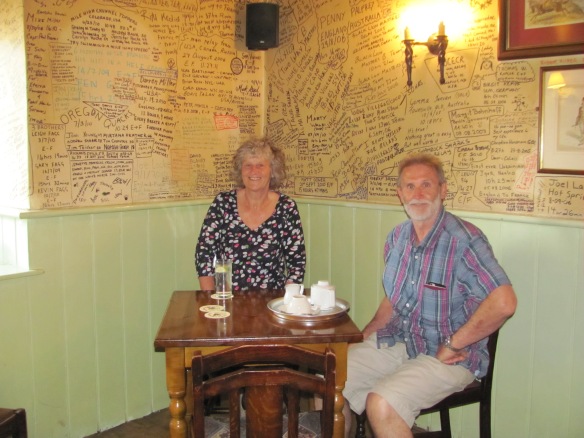 From there, we follow the walking route along the dual carriageway, then through narrow little streets, passing the ‘Last Pub in the Civilised World’, eventually arriving the top of the White Cliffs. We sit for a moment to gain our breaths at the National Trust café, which is closed now, and watch the stream of ferries coming and going into the harbour below, the same harbour we came through on our first day. A small yacht seems to be sailing around in circles in a quiet part of the harbour, presumably practising. Everything seems to run like clockwork, but we wonder what it will be like following Brexit. We continue on past the café and reach the viewpoint overlooking Langdon Bay. An Australian family there take our photos, and we reciprocate. They are travelling around Britain by car, and so far are enjoying every minute of it, but are finding it a bit cold. We tell them jokingly that this is as good as it gets.